After the release of Capture v1.41.3, we became aware of a number of issues that are affecting some of our users. Please find here a list of these issues with workarounds that would help you resolve them in the short term. These issues are our number one priority at the moment and we're targeting to have them resolved in the next Capture release.

Some Intrinsically Safe (IS) devices or rugged field devices like the ECOM and iSafe mobile devices have been seeing degraded performance after being used for more than one hour. This is an issue that we have seen in v39 (the previous version of Capture) and had addressed in the latest v41 version of Capture. However, it seems that some users are still experiencing performance issues with these devices.

The investigation is still ongoing, but we have seen performance improvements when the user closes the app on the tablet.

Workaround 1: to improve the performance, you can turn off the split-screen option in the settings. Unticking this option will turn off split screen for all users on the device.

Figure 1: Turn off the Split Screen

Workaround 2: when running into degraded performance on the device, it's worth closing the app after. Note that "backgrounding" the app (using the back button or the home button) to go to the device's home screen or another app will not close the app and will not be effective. 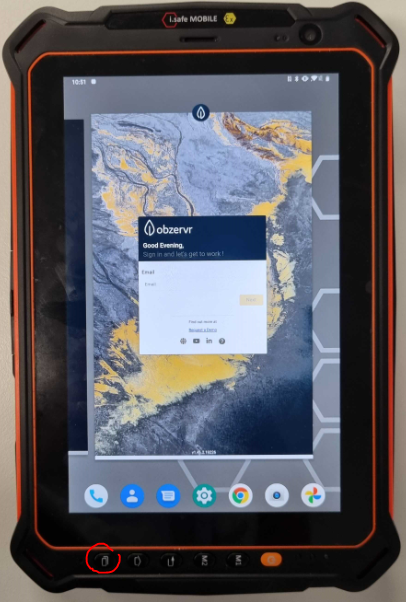 2. Some groups with mandatory fields are not completing

Occasionally users may run into a scenario where they are capturing information in mandatory fields, but Capture is not correctly calculating the number of mandatory fields the user has entered. The result is that the user cannot complete the group or even the work order.

Figure 3: Go back to the Dashboard and open the Work Order again

3. Associated user not being able to complete a group instance

We've had a report that an associated user was not able to complete an instance of a group with mandatory fields when the assigned user was also completing that same instance.

To prevent this from happening users can follow the above workaround and ensure that they sync Capture straight after completing one of the groups before the next user starts with the next instance of the group.

The workaround for this is to find any text field and attempt to edit the field then tap out of the field; the keyboard will collapse.

Figure 3: How to close the keyboard on the app

Some older iOS devices are seeing degraded performance when scrolling through forms and clicking on certain controls (like the complete check circle on a group). We are still investigating this issue and will provide more detail here.

Workaround: One thing that could help if you are experiencing this is to close the app and reopen it. To close the app double click on the device's home button and swipe up Capture from the app list/tray. The only other advise we could provide is to take it slow and be patient with forms that are especially long, going through the form faster can make the problem worse. Main issues we see are with tile based fields and when exceptions are raised. We are addressing this issue as a priority.