With the Capture v1.42.3 release, a major release, we are introducing a number of new features to Capture. These go hand in hand with a number of changes in Manager and Designer, currently up to v41.22. Additionally, we have addressed a number of issues in these releases.

A new feature that Obzervr is proud to present is the ability to create groups within groups. These "child" groups can be configured in your templates in Designer and then actioned by your users in Capture. This was a feature often requested by our users and now allows you to create instances of child groups (this was not possible with sections in groups) and use the group controls that were not available for sections (e.g. optional groups, priority groups, time series, etc.). You cannot, however, configure a child group as a prerequisite group. For more information please refer to this article.

This is a new feature we activate for your tenant(s); this means "Child Groups" will not be usable by default. You can contact us via [email protected] to switch it on for your tenant.

Another new feature in Capture is the ability to track the history of the data captured in groups within a Work Order. This is particularly useful when multiple people are working on the same Work Order, or in scenarios where a supervisor has to review a Work Order in Capture.

The feature will defer the saving of changes made to form until the user exits or deliberately saves those changes. Users can review the values for all the fields that were previously entered by others in that group. In addition, this provides the following capabilities:

This is a new feature we activate for your tenant(s); this means "Field History" will not be usable by default. You can contact us via [email protected] to switch it on for your tenant.

Please note that this feature is different from the field history that we introduced last year - which enables operators to have a focus history view of any particular field throughout different Work Orders as long as it's from the same Location/Panel/Plaint Item. This Instance Field History feature will allow operators to see the movement of a whole group within that Work Order only.

In addition to the synchronisation buttons in the Work Order listing pages (Dashboard and Team views) Capture now has a sync button directly in the assignment pages. This can help in scenarios where information captured in the field is required quickly in the office, or where multiple people are working on the same Work Order to ensure their changes are kept in sync.

Note that this feature is still in the experimental phase. We are releasing this to further test in production scenarios to ensure this is working as intended. Therefore this feature is not activated for your tenant(s); this means "In-Assignment Sync" will not be usable by default.

You can contact us via [email protected] to switch it on for your tenant, we will discuss with you the potential risk that this could introduce to your users.

Users are now able to 'clear' values in Capture that they previously entered. Users will notice the new 3 dots control to the top right of the field.
Tapping on these 3 dots will expose a popup allowing you to "Clear Value". This will remove the previously entered value and clear the record of the user entering this value (timestamp and user initials). This will also reset the counter of fields entered.
Note that if you are using conditional logic in your form, you need to cater for an additional condition when the field (that is driving the logic) is cleared. You now need to cater for the value of the field being "NULL", this is the value of the field after it's been reset. 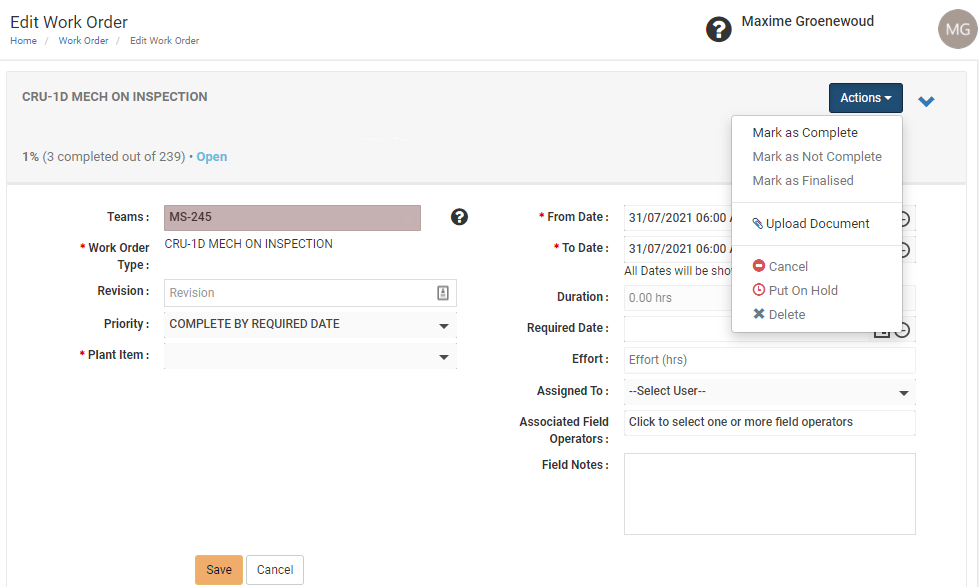 In this release, we have built on the work we started in previous releases to ensure that the touch areas of buttons, select boxes & circles and other controls meet recommended dimensions to support our field-based users to interact with these controls. In addition to this, we have cleaned up these controls to make them more uniform and thus improving the overall usability of Capture.

There are known issues in the Obzervr products that we cannot all complete before releasing a new version of the software. Here are some of the issues that may impact the day to day use of the Obzervr system (Manager, Designer, Capture):