With the Capture v1.41.7 release, a minor patch release, we are addressing some of the issues that were introduced with the previous major release v1.41.3. Refer to the list of known issues if you cannot yet upgrade to v1.41.7.

We're also catching you up with the latest change in Manager, now in release 41.17.

Capture v1.41.7 is now available in for all platforms in the relevant stores.

An exciting new feature for Obzervr is the "Group By" feature. This is a combined release of this feature in Manager and Capture. This allows you to group certain types of Work Orders so that supervisors can manage them. This way Supervisors can keep track of work that consists of many smaller activities or that are being performed by various teams. For more information please refer to New feature alerts - Group By.

This is a new feature that is hidden unless we activate it for your tenant(s). We can help you get started with Group By, please contact your customer representative or our support desk to arrange for a demonstration.

Figure 2: Group By on Manager and Capture

2. Changing the homepage in Manager to the Assignment Overview page

It is now possible to change the homepage of Manager from the Dashboard page to the Assignment (Work Order) Overview page.

This is a new feature we activate for your tenant(s); this means the homepage will be the Dashboard by default, but we can switch it to the Assignment Overview page for your tenant if you prefer.

With the introduction of v1.41.3, we have found that some users of lower powered devices, specifically Intrinsically Safe (IS) devices or rugged field devices like the ECOM and iSafe mobile devices have been seeing degraded performance after being used for more than one hour. Whilst we haven't gotten to the bottom of the performance issues in work order forms (groups) we have addressed performance issues with page transitions taking longer than they should. Refer to known issues below for remaining performance issues that may affect these devices.

2. Split Screen off by default

We have found after the release of v1.41.3 that the Split Screen feature uses more device resources than we had planned and was causing performance issues on older and lower-powered devices (like the Intrinsically Safe devices). We have decided to switch this feature off by default until we can get to the bottom of the performance issue. You can still use split-screen by turning it on in the settings menu of Capture. 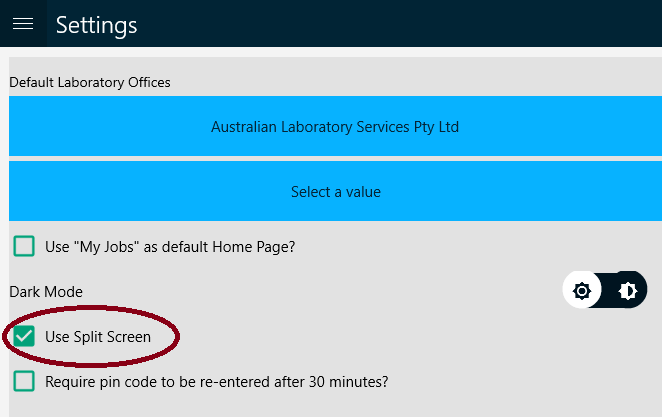 Some of our users were struggling to interact with some of the controls in Capture v1.41.3. Especially the complete group "circle" was hard to hit on some devices as the resolution of the screen tended to make these controls smaller. We have increased the size of these controls in this release to resolve this problem.

Figure 5: The Complete group select circle has been increased to improve the interaction.

We have found that in v1.41.3 the count of mandatory fields in groups would occasionally not reflect all mandatory fields that had been entered. Whilst this may still on occasion happen in the new release (see section 9 below), we did find problems with date, time and checkbox fields that have now been resolved.

Figure 6: The count of mandatory fields in a group.

Capture v1.41.7 brings some key improvements to the performance of forms. Users had experienced lagging in scrolling through (longer) forms, issues with the rendering fields and general slowness of the device responding to the entry of values. This was hampering some of our users actually completing forms. These issues should now be mostly resolved in this version.

Capture v1.41.3 was a large release with a lot of new features and an underlying platform update, unfortunately, that has meant that a number of issues became apparent after it was released to our users. We had created this article to provide context and workarounds for them. A number of these issues have been resolved with this v1.41.7 release; however, some issues are more complex to resolve and still remain.